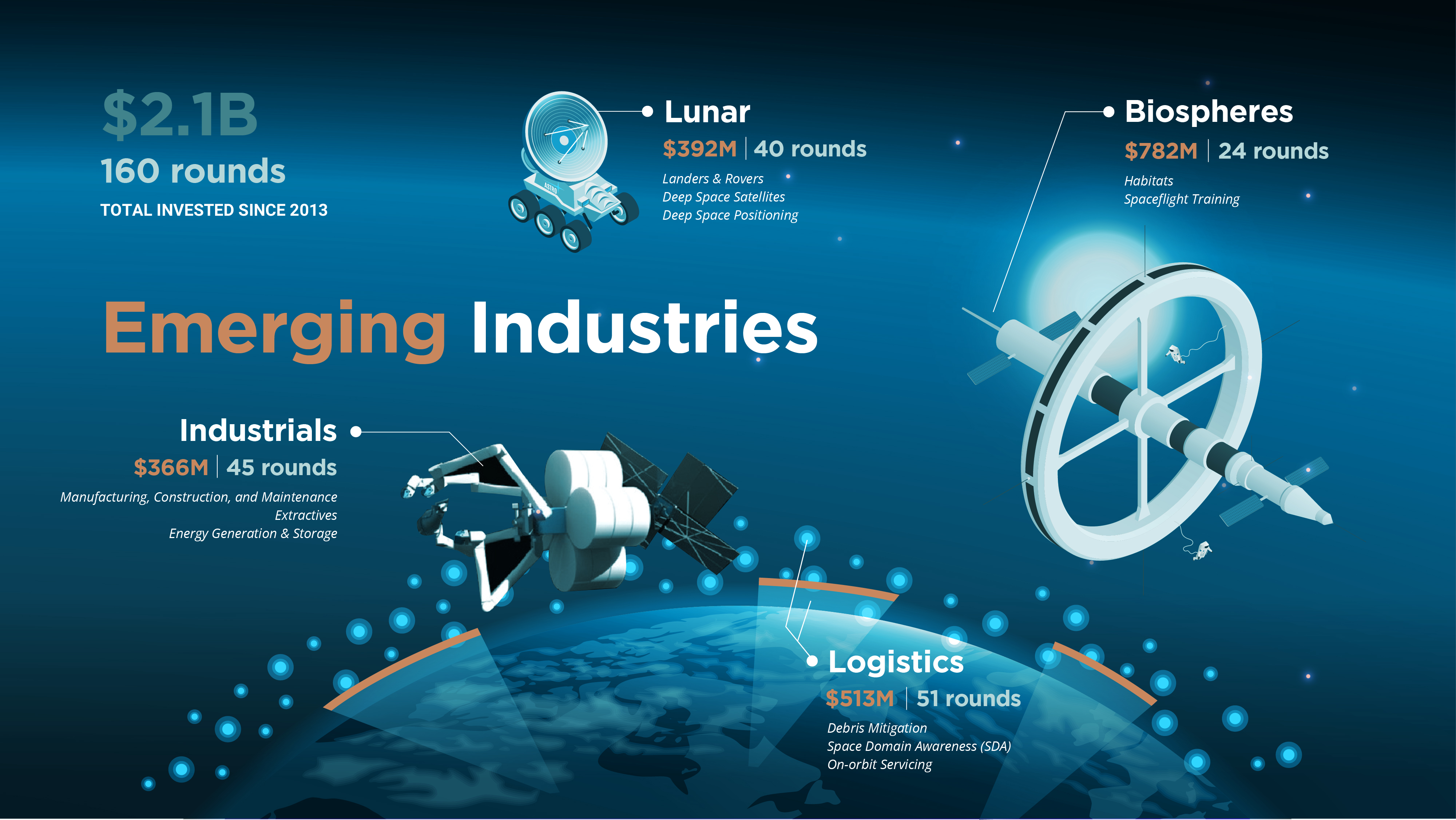 We have been operating in space for decades, but it has only recently become a category for investment. Since its beginning, the space economy has been a function of its launch infrastructure, constrained by cost (price-per-kilogram), upmass (payload mass carried to orbit), and payload volume (physical space available for a payload). For the first four decades post-Sputnik high costs and limited upmass kept orbit out of reach for anyone other than governments and their defense contractors. With rockets such as Ariane 5G, that entered service in 1999, commercial viability improved and enabled some of today’s key legacy providers to emerge, such as SES and Eutelsat, which then launched their first commercial communications satellites including Astra-2B and Eurobird-1.

With SpaceX’s Falcon 9 first entering commercial service in 2009 and pioneering reusability in 2015, the cost of accessing orbit came crashing down, which ushered in a wave of entrepreneurship and innovation. A group of new small launch vehicle providers like Rocket Lab, looking to follow in SpaceX’s footsteps, were subsequently founded. Pioneering geospatial satellite companies like Planet Labs began to take advantage of this new low-cost access to orbit, launching small satellite constellations of unprecedented quantity, and achieving daily revisit rates across the globe. This enabled the development of a new generation of capabilities across satellite technology stacks: GPS, Geospatial Intelligence, and Satellite Communications.

In fact, since 2013 there has been $264 billion of equity investment across the space economy and 99% of that total has gone to the Launch and Satellites industries, with the overwhelming majority going to the Applications layer of the Satellites industry.

89% of all equity investment in the space economy over the last 10 years has gone to the Satellites industry. GPS is undeniably the most successful space technology in existence and the history and evolution of that tech stack provides us with a framework for understanding how space-based technology has become a platform for innovation on a global scale. Specifically, the development of technology layers on top of space-based infrastructure that includes the  distribution of data for mass adoption, which unlocks thousands of unique applications. Viewing the Satellites industry through the lens of stacks and layers has proven fundamental to our understanding of the space economy and continues to inform our thesis. In fact, there are multiple examples of this pattern repeating across technologies including mainframes, personal computing, cellular phones, and automobiles. Right now, we’re only seeing these layers within Satellites, but we believe this approach will be applicable to all industries as they grow, mature, and become more software-defined.

While the vast majority of investment has gone to Satellites and Launch industries, we are beginning to see founders raise capital and build businesses focused on Stations, Lunar, Logistics, and Industrials. In fact, $2.7 billion has been invested into these Emerging Industries over the past decade, with 41% of that total invested in 2021 alone. This record level of investment last year was driven by venture capital firms, many of whom were investing in the category for the first time. The majority of rounds (82%) are early-stage (Seed, Series A), highlighting how early we are in the development of these nascent industries.

The geographic breakdown in Emerging Industries is also unique. The U.S. continues to account for the majority of investment (72%) as in other market categories, but Japan makes up 20% of the total investment in Emerging Markets over the last 10 years (vs. just 2% of total Infrastructure investment and 0.4% of total space economy investment). This $536 million of Japanese investment accounts for roughly half of all equity investment into Japanese space companies during the period, highlighting the areas of focus for Japanese founders and likely hints to where the Japanese government plans to invest its new $940 million fund for space start-ups.

2021 was a record year for investment in the overall space economy, with $45.3B invested across all space technology layers. It was a particularly massive year for investment in the space Infrastructure layer with $14.8B invested (56% greater than the prior record set in 2020). While venture momentum set all-time records for space investments in 2021, much of that capital was chasing solutions based on a 10-year-old Falcon 9 launch paradigm. As we look ahead, we see tremendous opportunities to scale mass adoption of the existing infrastructure as we look for radically new approaches to build and operate space-based assets.

Now, with Starship expected to come online later this year, we are entering into a new phase of Infrastructure development. Elon Musk has said that “full and rapid reusability is the holy grail of orbital rocketry”. Starship is poised to be that grail; there has never been anything like it. With the ability to launch 1,100 cubic meters and 100 tons to orbit for just the cost of fuel, Starship will completely change how we operate in space. SpaceX already fundamentally changed the economics of space 10 years ago with the Falcon 9 and Starship will have a similar impact, further reducing the cost to orbit, enabling Emerging Industries, and making existing infrastructure obsolete. As investors in this category, we’re looking for founders who see what’s coming and are building for this new reality.

Check out the Space Investment Quarterly