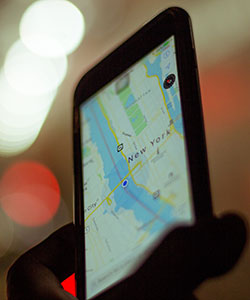 It’s hard to remember what life was like without ubiquitous GPS technology. Satellite navigation has not only made it easier to figure out how to get from Point A to Point B, but it has also created enormous value for an entire generation of companies, from location-specific services like Uber and Airbnb, to logistics, agriculture and retail businesses. Indeed, GPS powers our modern global economy.

Now another big shift is about to take place, sparked by rapidly improving Earth-observation (EO) and communications satellites, and the creation of tools that will democratize this data for all kinds of business, environmental, and philanthropic uses. These satellite constellations will provide truly global internet connectivity, which will power the automated systems that are about to reshape many industries. They’ll also enable the collection of new types of data that will drive increasingly powerful and specific business insights.

Space Angels has been monitoring the progress of these sectors for some time. We’ve been assessing the gaps in the market and which areas are poised for growth and investing in the most promising companies that will drive the market forward. These include EO satellite manufacturer and operator ICEYE; SkyWatch, a platform for distributing EO data; and GHGSat, which monitors greenhouse gas emissions.

Another way of gaining insights into the future of satellite and EO technology is by learning more about the past. To this end, Space Angels has been taking a close look at how GPS became such a powerful tool, and why the industries that sprung up around it have grown and flourished.

Military technology that became open to all

Although the Global Positioning System (GPS) is used by people all around the world for free, it is owned and operated by the United States military, at an initial cost of $12b and an ongoing cost of $2m per day. Originally launched in the 1970s for military use only, it involves a network of around 30 satellites which orbit the globe, communicating with ground control stations and bouncing information to the devices we carry around with us.

Since 2000, civilians have been able to access the same highly-accurate service as the military, which can now pinpoint a location within a couple of feet. Because of the strategic advantages of owning such powerful technology, rival satellite navigation systems at various stages of completion are being built by Russia, China, and Europe, while Japan and India are creating their own versions to cover specific regions of the globe.

In the 20 years since this powerful technology became broadly accessible, software infrastructure has been built around it that has enabled further waves of innovation. Apple, which integrated GPS into the operating systems of its mobile devices early on, and Google, which created a mapping service that’s now used by two-thirds of smartphone users, played an important role in creating standardized APIs. These companies allowed all kinds of businesses to integrate location-based data into their own products and services.

This is a great example of what can happen when data becomes democratized. Entrepreneurs around the world took GPS technology, something that at the time had a limited military use, and turned it into the ubiquitous technology we use in our day to day lives.  While there are differences between where GPS was in the early 2000s and earth-observation technology is today, the same thing can happen when the technology becomes open to all.

Advances in AI will continue building upon GPS infrastructure

It’s now commonplace for companies to incorporate features such as geotagging into their services, allowing people to associate photos and other media with their whereabouts, or to create advertising campaigns that target users in specific areas. Users’ location data can also be used by organizations to gain strategic insights and to personalize their services. It gives them the valuable ability to communicate with the right people at the right time and place.

Geofencing, software that responds to users entering a specific geographic zone, is another development that has had an impact on many industries. This could mean showing a Macy’s ad to a customer as they are walking into a mall, but the uses are much more widespread, impacting sectors like shipping, aviation, and agriculture. Geofencing can be used to stop drones flying into protected airspaces, automatically clock in workers as they perform fieldwork, and show location-specific filters to Snapchat users at festivals.

As big-data and automation technologies continue to develop, new uses of GPS are continually being invented, and location tracking will be critical to industries that are still in their infancy, such as augmented reality (AR), autonomous vehicles, personal AI, and other smart tools.

The EO and communications sectors are poised for similar growth

New technology enabled by Earth-observation and communications satellites could have an impact that is just as far-reaching as the products and services built on GPS. Truly global broadband internet has obvious commercial potential, while data gathered by remote-sensing satellites can generate insights into countless industries, from tracking consumer spending habits to streamlining natural resource management.

However, for this market to be fully unlocked, gaps in the value chain need to be filled. Unlike GPS, the EO and satellite communications sectors don’t have one organization that can do all the research, build all the infrastructure needed, and pick up the check. Instead, the industry is growing incrementally as companies seize the opportunity to specialize in one particular part of the value chain.

As we’ve seen in other sectors of the commercial space industry, this type of experimentation can create economies of scale, lower prices, and unlock access to satellite data to an array of businesses, thereby growing the size of the overall market considerably. In order for the sector to flourish, infrastructure is required at three layers. Within each of these, companies can carve out specialized niches:

Just as we saw with GPS technology, it’s likely that this democratization of data can lead to an explosion of new technologies that have a wide reaching impact on our lives. Few would have foreseen the ways in which GPS would change our lives (geo-based Snapchat filters and all), but by looking back at this growth, we may gain an insight into how earth-observation satellites will change the future. This technology has the potential to impact so many areas, it’s just a question of the EO value chain coming together before we see the rapid development of new applications.

When GPS technology was being developed for military purposes more than 40 years ago, no one could have foreseen that this technology would one day give rise to a phenomenon like Pokémon GO. This game not only grossed more than $5bn in revenue, but it has also pointed the way towards new types of location-based marketing and new forms of AR-driven entertainment.

Satellites that enable communications and remote sensing have been around for decades, and their capabilities are improving every year. What will transform this industry is the creation of solutions that will open up access to this data, so that app developers working out of garages and university departments can invent the kind of tools and services that we can’t even imagine now.

As the EO and satellite communications sectors mature, they’ll spark similarly unexpected innovations that may become the next billion-dollar success story. Once this technology is truly democratized, it may become so central to the way we live and work that we forget how we ever lived without it.

GPS technology may have given us a look at how EO technology will play out in the future. Once the value chain is in place, and we’re able to democratize these new data sets, then innovators around the world can put it to use to create new technologies. We might not yet know what those technologies look like, but we can spot the organizations that are helping to bring this democratization about. These early movers could become indispensable to the next wave of satellite technology.